Planetside 2 Launches
November 20th, 2012 SOE launched Planetside 2. And although no one ever reads the credits in games, The Syndicate is featured there: 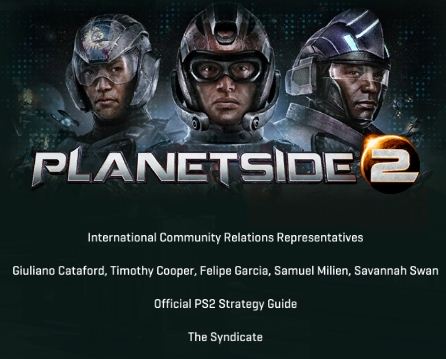 The PS2 wikia project was a great one to work on for several reasons. First, working on strategy content directly with a game developer was a far smoother and more successful process than working through Prima Games. There are two reasons for that. The first being that the developer asked for the guide so they have a vested interest in making it a success. When Prima does a guide, they pay the developer for the rights to create the guide and there is not the same vested interest. Second, when we work directly with a developer, there is no middleman so to speak. Questions get answered quickly and efficiently and the process flows much more smoothly.

The second big, positive difference in this project was that it was an electronic guide. When Prima makes a print guide they have a page count they need to hit. That means you either end up creating fluffy, not so useful, filler content to get to the page count OR you end up cutting out valuable data or valuable strategy to get back down to the page count. Neither one is the desired result. The guide should be however long it needs to be to give players what they want, without fluff and filler. The electronic guide format achieves that goal.

There are, however, downsides to doing an electronic guide in the wiki format. The first is that when using Wikia as the host, there is no ability to lock/secure/hide a wiki during development. So as content is being created, it is fully visible and editable by anyone. That caused lots of rework as players jumped in, with less than complete/current information, and made incorrect changes or redid the formatting etc.. So for future projects, a more secure way to do the development would be something we'd look into. Second, the fact that it is a wiki and isn't secured/hidden until launch means that the "live" wiki is incomplete. Things like Strategy do not really get fleshed out until just before launch because the game is constantly evolving until then. So the product looks less professional and less thorough during its lifecycle until right before launch when content explodes into the wiki as the game itself finally crystallizes enough to warrant adding all of that content. Alternatively, one could force content into the wiki all throughout the development process but that makes for a ton of wasted time and effort as that content will for sure change.

All of that said, the upside of working with a great partner like SOE and creating an electronic format wiki FAR outweighed the challenges of the wiki format. The challenges can be addressed in future projects and the upsides will always make this kind of relationship result in a superior product, that is more current and accurate, with less stress and wasted time than the traditional model of guide will be. And, when all is said and done, it becomes a community sourced, living document and that is truly the power of the wiki format.