Groups of players are typically referred to as Guilds or Clans in the online community.  To call The Syndicate a guild would be to greatly understate what we are. As far as 'guilds' go, we are among the oldest guilds in online gaming and by far the most successful. Not only are we the largest online gaming guild (with around 600 active members) but we have also achieved an unheard of retention rate with more than 85% of our guild being a multi-year member. But again, to call us a guild isn't a fair comparison. We are part guild... part successful company... part community of friends... part competitive team... part gamer all rolled into the most successful online organization ever created.

The Syndicate® hosts a yearly conference for our members at various locations around the United States. It has the distinction of being the largest single guild gathering in the history of online gaming with well more than a hundred members, along with a number of developers, attending each year. We hold many smaller gatherings all year long from dinners to LAN gaming parties to consulting round tables and much more.

The Syndicate® is also a very experienced beta testing guild. We have been involved in large numbers of beta tests. We understand what is expected of a beta tester and how to add value to the test and to the gaming community as a whole. We participate in several player advisory groups and do private tests of specific game functionality as requested. We believe very strongly in doing our small part to help make online gaming better for all gamers.

The Syndicate® was the first MMORPG guild to obtain a corporate sponsor. We are very proud at being the first to set a new standard for the MMORPG world.

The Syndicate® has Trademarked our name and logo and their use is not permitted without our express written permission. We took this step to insure that our efforts at developing The Syndicate would be protected in the online gaming world. Our marks apply to "Entertainment services, namely, an online gaming guild providing in game opportunities for proliferating game expertise and camaraderie among gamers supported by a web site featuring multimedia materials." We are proud of our involvement in a host of services that include, but are not limited to, our annual conferences, submissions to game development books, the articles we have written for gaming publications, guides for specific games or aspects of games, our book Legend of The Syndicate and a line of gaming related products and clothing. Those are but some of our guild's services. The Syndicate is not simply a collection of people playing MMO's that share a title. We are an online gaming community that strives very hard to provide outstanding services and benefits for our members and also for the gaming community as a whole. 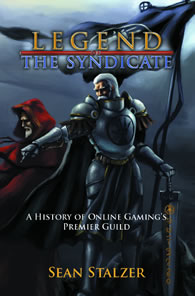 The Syndicate is the first MMO guild to have a book written about it. Published by Avari Press in 2007, Legend of The Syndicate tells the tale of the first 11 years of history in the online gaming world. In the book you will embark on a fascinating look at the history of online gaming through the eyes of The Syndicate, one of the most successful online organizations in the history of gaming. Discover the origins of online role-playing fantasy games, such as Everquest and World of Warcraft, that have captivated more than 10 million people worldwide. Relive the challenges and triumphs, and journey into distant lands of magic and mystery where every turn is fraught with danger and every decision could spell the end of years of hard work. Follow The Syndicate as they navigate the ever-changing online world and develop into an unstoppable juggernaut that shaped the future of the virtual world. 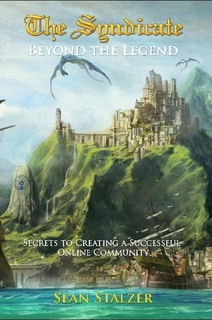 In May of 2011, our second book, Beyond The Legend went live. Responding to feedback on what readers wanted to have seen in our first book, our second book is described as: Continue on a fascinating journey through the history of online gaming as seen through the eyes of The Syndicate, one of the oldest and most successful player organizations in the history of gaming.

Learn the secrets to creating, maintaining and growing your own stable online community. More than fifteen years of Syndicate experience are boiled down into a formula for success that you can apply to your guild. Time tested methodologies and lessons are shared to help you create success for yourself and your friends.

With Foreword's by Curt Schilling (who described the book as: "In this book you will hear from someone who as 'done it.' Sean's been there and done that for well over a decade...") and John Smedley (who described the book as: "This book does a great job explaining the things that make The Syndicate work and how to take those lessons and apply them to making your own guild."), Beyond The Legend is a great read and contains content that is valuable, insightful and entertaining to read. You can pick up at copy at LULU.COM or at Amazon.com among other places. The Syndicate is unlike every other guild in existence because we are not a guild. We are a virtual community of friends that use online gaming to grow our comradery and to, as your Trademark says, proliferate gaming expertise. The Syndicate® does it all. And we do it better than anyone else. We are the most successful player created online gaming community in the history of online gaming and we are very proud of that distinction.

*Information compiled by The Syndicate throughout our existance, using publically available information coupled with our own tracking and research of guilds.

©2023 The Syndicate. All rights reserved.